Since the COVID-19 pandemic started, it seems that animals or non-human-like beings have come back into the focus of many artists. It may be obvious to turn into something like positive escapism in times that are collectively perceived as stressful. At first sight, this escapism may be connected with the topic and or motive animal in general.

Actually, the animal has been more present in artistic creation and artistic-scientific research for about 10 years. In this context, many questions are examined of course, for example the reconsideration of the nature of animals or that different arrangements are designed for a participatory access to art and so on.

In her works, the artist Cornelia Dorfer deals with the different functions that animals can have - from a human-centered point of view. Besides a mere incentive for artistic and creative productions (fashion, design, etc.) there is a wide range of these functions: From the brutally held food supplier to the object of pleasure (hunting, sports) and cuddly toy to the essential companion for people with special needs or in challenging life situations (therapy animals, guide dogs).

Based on photo collages, digital images are further processed into paintings. The works seem strange and at the same time familiar, they play with topics such as rapprochement, friendship, abuse and ultimately: alienation.

EXHIBITION: DAS TIER DER ZUKUNFT [THE ANIMAL OF THE FUTURE]

Where the stink bugs live, the woodlice eat and

where the dung beetles go to sleep ...

In this project, the sensitive living environments of insects are examined more closely.

Insects are further away from humans and they are less often humanized. They ain't pets, we don't go for a walk with them, we don't cuddle with them - at least not knowingly.

There are, it tends to be, less to zero funny YouTube videos with millions of clicks. Nevertheless, there are also the more popular the "sweet" and loving insects, the useful ones. And those that are used as emoticons, for example: Butterflies, bees & Co.

On the other hand, there are those to whom we pay less attention. We might even find them gross, labeled as vermin, or just plain boring. But why, actually? Of course, insects are also exposed to prejudices, empty phrases and myths. We'd better take a closer look at that!

As collages combining digital (photography, image processing) and analogue techniques (drawing, painting), with the attempt to represent the inherent beauty of every living being.

Many negative sides and consequences of plastic production are widely known. But what are the sociological and cultural-anthropological implications? The history of technology and its innovations has always been linked to the cultural history of humanity, too. Plastic can be vital, plastic can be wasteful. Plastics can be in and with art itself: computers, devices, erasers, acrylic paint, music instruments - and this raises a moral-ethical question: Who is allowed to do plastic - when and in what context?

Living on different continents but still in a similar, postindustrial, globalized and capitalistic world, Cornelia Dorfer (*1983) and Edward E. Kijowski as Lily Lake (*1986) explore plastic conditioned mainstream phenomena, their constructions and representations about the mass media and how they interact with people in the past, present, and future.

Here, the perspective is not critically evaluative but rather documentary: Collective and personal memories of cultural techniques, everyday rituals, trends, secularization processes, object fetishisms, constructions of stereotypes including defamation - or just simple dream sequences of a partially massively overwhelming media world are held frozen and are reconstructed or further transformed.

This exhibition brings together selected works like mixed media objects such as 3D printed objects combined with wire or acrylic glas, textile photographic works, or so-called "everyday assemblages" from various (found) materials like chocholate, with and as small photographs.

The works from the exhibition {yet} arise from different directions and circle in a playful way to various forms of confrontation with fixed ideas plus the dualism of random events and the pursuit of perfection.

To let oneself in when approaching the limits of controllability is not only an essential feature of artistic creative processes - it is also an indispensable human life-coping strategy. The results show up in art and everyday life, in small or large scale, incessantly. Often just the discrepancies let things appear charming and interesting. They can surprise, confuse, amaze and throw new lights on the familiar. 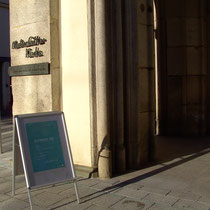 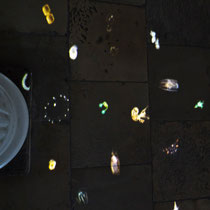 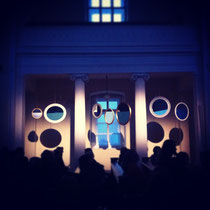 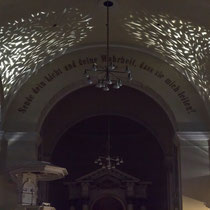 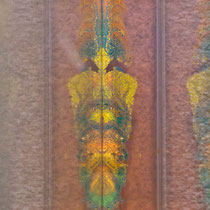 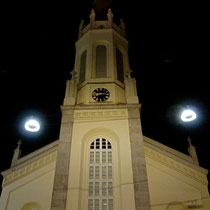 The term Halcyon Days comes from Greek Mythology and refers to seven days in Dezember around the winter solstice, when the sea remains completely calm. According to the tale about Alkyone and Ceyx by Ovid, the kingfishers nest at this time on the water which remains silent until the eggs have hatched. Methaporically, Halcyon Days stands for a nice, shortly tranquil and (perceived as) perfect time in the midst of turmoil.

All projects sponsored by:

improvised concert on self-made instruments. These instruments are mobile "bricolages", made of old ps2- 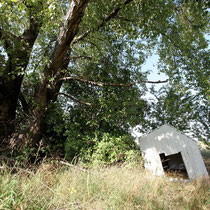 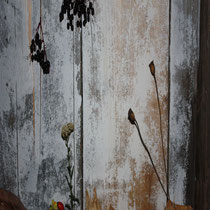 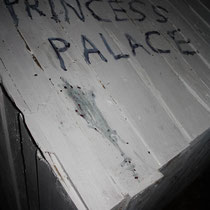 Part of the socio-cultural project "Seestadt Aspern" this mysterious shack was constructed of found materials. Concealed in rough terrain, it's hard to discover; it should serve as a kind of secret shrine. People who come there by chance can put artefacts or finds in it.